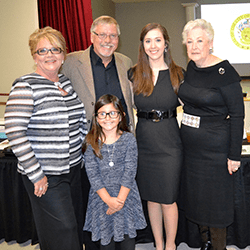 Friday, January 22, was surely a night to remember for Karen Simmons as family, friends, co-workers, dignitaries and members of SouthWest Mobile County Chamber of Commerce honored her as 2015 Citizen of the Year.

After Chamber President Donna Abercrombie welcomed guests, Dr. Alice Frederick and COY Chair Theresa Orrell gave presentations on Simmons’ accomplishments and qualities that led to her having been selected as Citizen of the Year.

Among the many boards and organizations on which Simmons has served are the Beckwith Children’s Camp, West Mobile Rotary Club, Relay for Life, United Cerebral Palsy Breakfast with Santa, Junior Achievement and Crewe de la Dauphine Mardi Gras society.  Simmons was nominated for COY by an employee of her CPA firm, Amanda Graves.

Simmons’ philosophy, which she said was best exemplified in a taped message by TV personality Steve Harvey, is that “You have to have faith to jump.”  All who spoke of Simmons indicated that she has never been afraid to jump, to take that leap of faith, to, as Margie Wilcox noted, “be there when people need her.”

The Citizen of the Year dinner at the Tillman’s Corner Community Center was provided by Grand Catering, Inc.; decorations were by Tina Poiroux, Executive Director of the Community Center.

Below are scenes from the banquet honoring Karen Simmons as SouthWest Mobile County Citizen of the Year 2015.  Photos are by Jo Anne McKnight.